As part of my research in the field of compound fugues (that have more than one theme), I decided to write a fugue that is both compound and mirror one. A mirror fugue, as a definition, would require, after displaying the fugue’s prime variant (rectus), to follow its mirror fugue (inversus), and in it, each voice must be a mirror (inverted) variant of its prime variant. If one or more of the voices are not inverted, that would be called “a partially inverted” work. But the order of voices in the inversus may vary. Depending on the order of voice appearance, a scheme could be drawn, looking something like this: 1, 2, 3; 1, 3, 2; 2, 3, 1; etc. – these voices could be charted also vertically, as in the scheme shown below. In a two-voiced fugue for example, we could theoretically have four possible variants of it – (rectus+inversus): 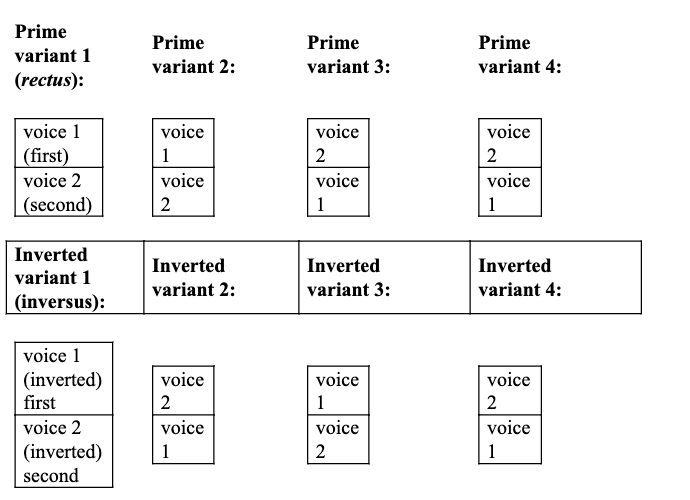 These definitions could be used only if we know which variant of the piece is rectus, i.e. the first half of the piece, and which is inversus, i.e. the inverted variant that immediately follows. In Bach, in Die Kunst der Fuge, it is not exactly clear which of the two variants comes first; this might have be the Master’s original idea. But if we exchange rectus’ and inversus’ places, laws of symmetry will change too – more about that below.

In a three-voiced fugue, hence, its six possible variants could be as follows: 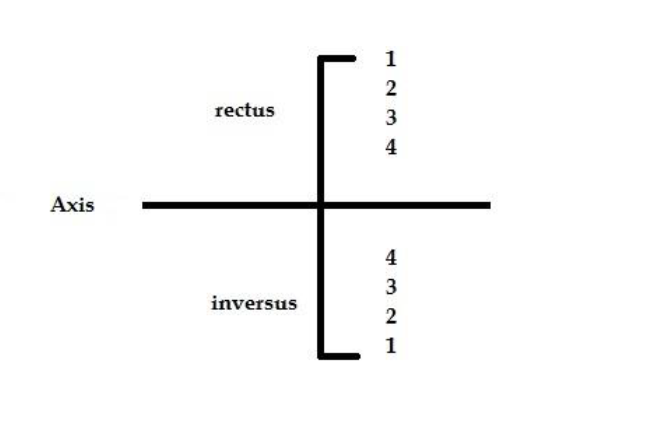 In this case, because both variants (rectus and inversus) are in the same key (D), it does not really matter which one of them would be first, i.e. the axis of symmetry is D. If we switch the pieces’ places, we would receive: 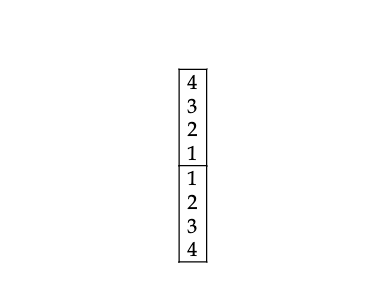 In Contrapunctus XIV, which is a three-voiced fugue, the principle does not appear to be the same: 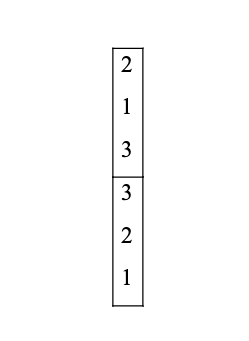 but both the key and axis of symmetry remain the same – D. That means that here it is not clear, again, which fugue is rectus, and each – inversus. But here we can no longer talk of central symmetry. Here it appears that there are three voices and three axes of symmetry: 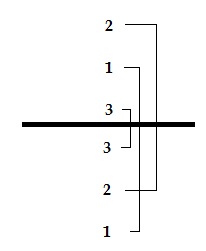 This incredible technical feat displays the Master’s mathematical way of thinking – even if it is a given that central symmetry does not exist, the two pieces are “interchangeable”.

But there is a way to define categorically which variant comes first, and each – second, and this would happen if the axis of symmetry does not coincide with the key tone. If we introduce a two-part (Baroque) form elements into the fugue (for example), then the first fugue (rectus) would appear in the dominant key in inversus. That means that the inversus would have to begin from the dominant, and then return to the original key. that is why, when planning to write my mirror fugue, I decided to do exactly that – the rectus would begin from D, and inversus from A, in other words, the inversus would be the transposed variant of the rectus on a fifth/fourth. A direct consequence of this is that if inversus is the strictly inverted variant of rectus, it would end on E instead of D (it would not return to its original key), thus creating a contradiction. This contradiction I solve by introducing minor corrections in the piece’s penultimate measure – this is the only measure that is not a strictly inverted variant of the original.

When the axis of symmetry coincides with the key, we also observe an exchange of harmonic functions. The dominant becomes a subdominant, and vice versa. With a changed axis of symmetry, such a phenomenon does not exist. In such a case, depending on the chosen axis, various chromatic complications could appear – that could be amended (sometimes) in the inverted variant by using fictae. This principle is used in Bach’s mirror fugues.

Another condition in my experiment is that the fugues must be compound. I decided on two themes, when the second one appears together with the first, in both prime and inverted variant of both themes.

My last condition was to make one of the two themes a modulative one. As an indirect consequence of this, one of the themes is slightly longer than the other.

It is a somewhat paraphrased variant of the theme of Bach’s Duetto 1 BWV 802. To add more color to it, I made it chromatic (chroma=color). Its first segment of four eights is both inverted and retrograde variant of its second segment. The octave leap that follows is not always used in the piece (sometimes a unison is used instead).

This theme “borrows” the first seven notes of the theme of Fuge in G major by Bach BWV 577 (authorship is disputed).

A fuller definition would be that parallel voice movement will remain parallel, oblique – the same, and contrary – the same, but always in the opposite direction. Number of voices is of no importance; intervals achieved in vertical between the voices in rectus remain the same in inversus.

When the voices are more than two, however, the situation gets more complicated. With central symmetry, the higher voice will became the lower one, and vice versa. If the pieces comprises three voices, the middle will remain the middle; if the voices are four – the two inner voices will switch places as well.

Thus we can no longer rely on the voice that had been a soprano in rectus, to have the same function in inversus. Its inverted function will have to be different from its prime one. The soprano will have to become a “future bass” and sometimes vice versa. 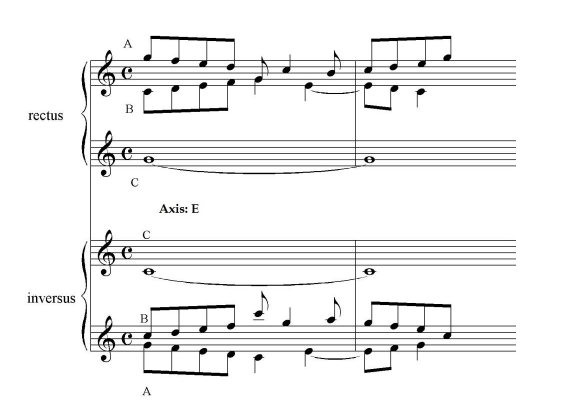 Even more complicated would be a situation where the fugue is mirrored not by means of central symmetry, but by multiple axes, (in other words, with a different order of voice occurrence in inversus) – this type of reflection I call an asymmetrical mirror. Depending on their order in inversus, the bass (for example) may remain the bass, while the other voices will occur in different order (let us not forget that all voices have to be inverted in inversus): 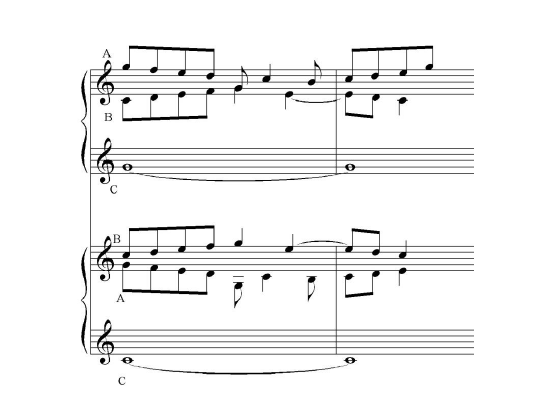 A note about horizontal counterpoint – in addition to the canon used in the second theme in measures 22 – 23 (respectively, 45 – 46), I discovered that it is possible for this canon to occur at the background of theme 1, moved (late) by a quarter.

Style: baroque (free style). A dissonance may be resolved up. There is no preserved countersubject to the themes.

Writing process: the only counterpuntal/compositional technique that I believe is possible, is to write the rectus and inversus variants one above the other. Thus, while writing one variant, I could see immediately how the other one would look, and vice versa. “Standard” laws apply, concerning mirror counterpoint, while the most important means is to determine the axis: in some cases the fourth may be “reflected” into a tritone, “false” seconds and sevenths do not sound well, in most cases. Additional problem would be to write the piece for a (single) keyboard performer. Then the voices cannot get too far from each other, as they would make it hard or impossible to perform (in most cases) in inversus. Solution to this problem might often include multiple voice crossings (in inverted variant they would be crossed as well), and in extreme cases, in rectus, an interval could be exchanged with its inverted variant (index=octave), for example the second may be exchanged with a seventh, a third with a sixth, thus receiving the same tone. Also in extreme cases, one interval may be used instead of the other: 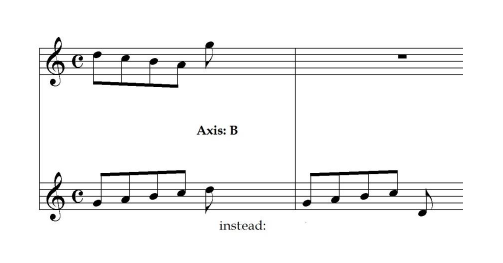 The two themes appearing together: first theme in tenor, inverted (in D – tonic), and second in soprano (in D), prime, m. 16.

Fragmentary occurrence – the first theme in tenor, prime, together with the second in soprano, prime, in the middle of m. 20, followed by two fragments of the same theme in both straight and inverted form, in the second half of the same measure.

Last occurrence of both themes simultaneously: in the stretto, with a canon of the second theme with itself. In m. 21 it appears in alto, prime, followed by itself in soprano, inverted, with a horizontal shift of half a note, in the beginning of m. 22. This canon occurs simultaneously with the first theme, which appear on the third beat of m. 21, inverted.

Last occurrence of the second theme, with one changed tone (always the last) happens in soprano, m. 24.

A note related to what was written earlier about voice crossings – in this fugue an interesting phenomenon may be observed: when soprano and alto in rectus exchange places in inversus, there are some unexpected crossings between alto and tenor. In m. 10 of rectus, these voices are not crossed, but become crossed in inversus – because there the “former” soprano becomes an alto. The opposite happens too – in m. 16, alto and tenor are crossed in rectus, but not in inversus.

As mentioned before, m. 24 is not strictly inverted form of m. 49. These two measures are surrounded by a double barline.